FILTER CELEBRATES THE 20TH ANNIVERSARY OF THE AMALGAMUT WITH FIRST-EVER VINYL PRESSING AND EXPANDED DIGITAL REISSUE. 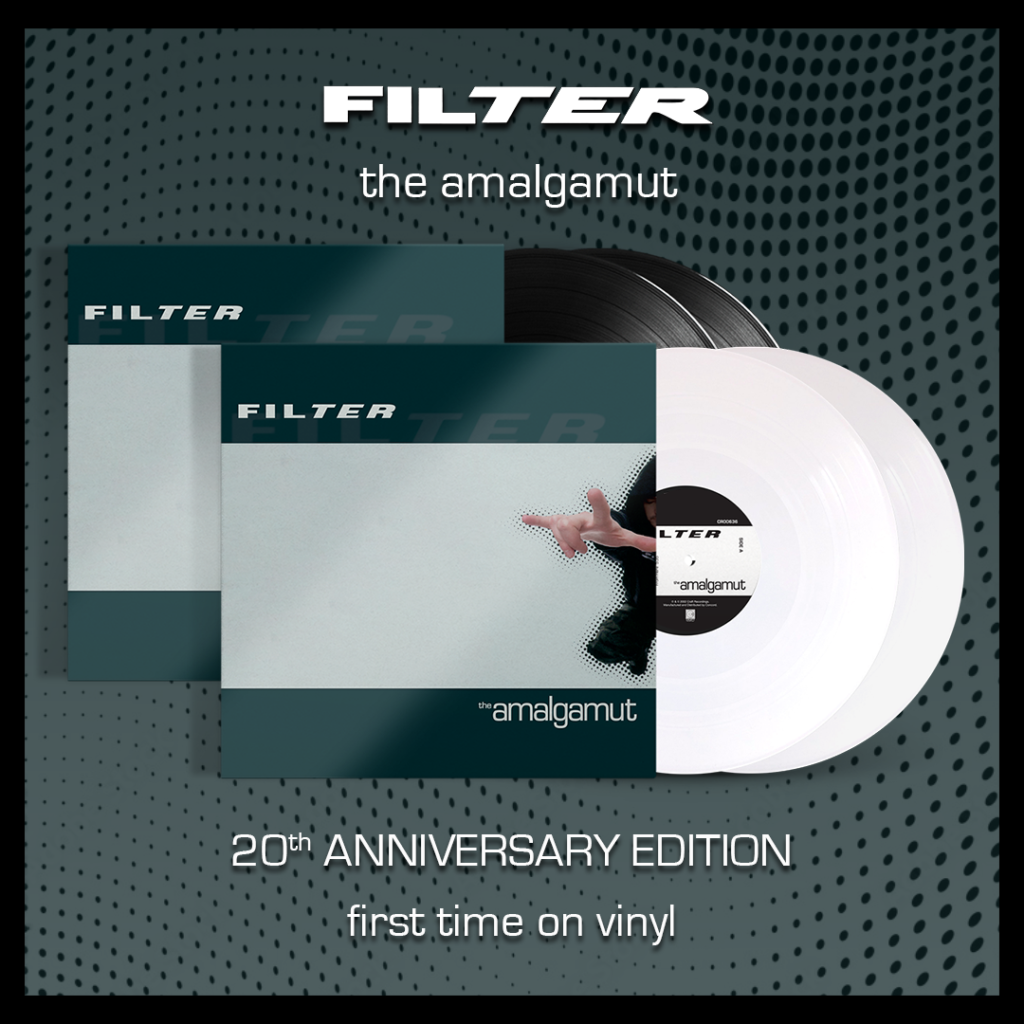 FILTER CELEBRATES THE 20th ANNIVERSARY OF THE AMALGAMUT WITH FIRST-EVER VINYL PRESSING AND EXPANDED DIGITAL REISSUE.

Expanded digital edition of the album available today, featuring nine remixes and alternate versions of hit single “Where Do We Go From Here” 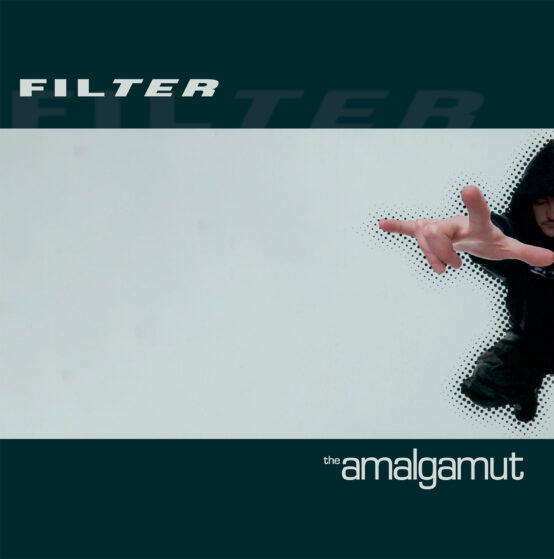 Craft Recordings marks the 20th anniversary of Filter’s critically acclaimed third studio album The Amalgamut with two special reissues, including the album’s very first vinyl pressing. In stores on March 31st and available now to pre-order, the 2-LP vinyl edition is presented in a deluxe gatefold jacket and features the hits “Where Do We Go From Here” and “American Cliché,” as well as “The Only Way (Is the Wrong Way),” which was featured in several films and commercials.

An autographed opaque white pressing (limited to 500 copies worldwide) is also available exclusively on our website. 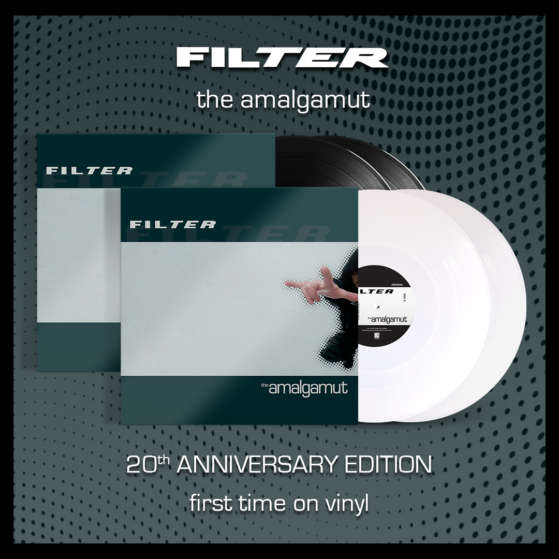 Beginning today, fans can also stream or download a new expanded edition of the 2002 album, featuring nine remixes and alternate takes of “Where Do We Go From Here”—all of which were previously unavailable on digital platforms. Among the highlights are two mixes by the popular British producer DJ Hyper, plus two re-imaginings of the song from the legendary New York City DJ crew the X-Ecutioners.

When The Amalgamut was released in July 2002, Filter—and specifically its primary member, Richard Patrick—was at a crossroads. Formed in 1993 by Patrick (the first guitarist for Nine Inch Nails), Filter shot to dizzying heights with their unique blend of industrial pop and post-grunge alternative metal, while their 1995 debut, Short Bus, was a platinum-certified best-seller, thanks to the hit single “Hey Man Nice Shot.” Two years later, Patrick enlisted a new line-up of musicians to record Filter’s 1999 follow-up, Title of Record, including members of his touring band (guitarist Geno Lenardo and bassist Frank Cavanagh) and drummer Steven Gillis. While the platinum-selling Title of Record yielded Filter’s biggest hit, “Take a Picture,” Patrick’s ongoing struggle with alcohol and substance abuse was reaching its peak.

Feeling the pressure to deliver a third best-selling album, Patrick’s demons only intensified as he began work with his bandmates and producers Ben Grosse (Depeche Mode, Underoath, Disturbed) and Rae DiLeo (Veruca Salt, Rufus Wainwright). Several of the songs on the album found Patrick addressing the powerful—and untenable—grip of addiction, including “God Damn Me” and “Where Do We Go from Here,” in which he sings, “The combination of lost control/The loss of soul…I’m not so glad I met you.” In addition to looking inward, Patrick also wrote about the turmoil that was taking place around the country during that time—from school shootings (“Columind,” “American Cliché”) to the terrorist attacks on September 11th (“The Missing”).

­­­The Amalgamut had lighter moments as well. Much of the inspiration behind the album came from Patrick’s travels across America. Initially, he was struck by the number of chain stores and fast-food restaurants in every town, and the lack of distinctiveness that had spread from region to region. But soon, as he explained to Sound Decisions, “I realized that the people of America are so cross-cultured now that that is where you are going to find [individuality].” He continued, “There are so many different, freethinking people, and that’s a good thing. Within our homogeny you find incredible diversity.” From that epiphany came the concept—and the title—for The Amalgamut.

The album was well-received by fans and journalists alike, peaking at No.32 on the Billboard 200, while lead single “Where Do We Go From Here” landed at No.11 on Billboard’s Hot Modern Rock Tracks and No.12 on Hot Mainstream Rock Tracks. Q Magazine hailed The Amalgamut as “A robust blend of anthemic choruses and electro-tinged riffing,” adding, “it will appeal to fans of Depeche Mode and Metallica alike.” Entertainment Weekly called the band’s sound “more honed than ever,” while AllMusic declared, “The Amalgamut proves that there’s much more to the band than ‘Hey Man, Nice Shot.’”

But two months after the album dropped, just as the band was set to embark on an extensive tour, Patrick checked himself into a rehab facility and canceled all further engagements. “I went through a music phase where I was writing as I experienced my life within drugs and alcohol,” Patrick told Cryptic Rock. “When I had gotten to the point when I couldn’t go on stage for that tour I hit the brakes…I couldn’t keep up the pace of touring like that. The Amalgamut suffered but it’s still a great record.”

Fans would certainly agree. While The Amalgamut never had the promotion that it deserved, it remains a gem in Filter’s catalog. Patrick, meanwhile, was able to overcome his addictions and today, he is proudly 20 years sober. Since then, Filter has released four more albums, all of which landed in the Top Ten of Billboard’s Hard Rock chart, including the broadly acclaimed The Trouble With Angels (2010) and The Sun Comes Out Tonight (2013). Outside of the band, Patrick has also performed in the supergroups The Damning Well (featuring members of Nine Inch Nails, A Perfect Circle and Limp Bizkit) and Army of Anyone (a collaboration with brothers Dean and Robert DeLeo of Stone Temple Pilots).

This year saw a surprise reunion show with Patrick and Nine Inch Nails—the first time they played together in 26 years—and a brand new Filter single, “For the Beaten,” out on Golden Robot Records. Patrick is readying the release of Filter’s eighth studio album in 2023. Next year will also find Filter embarking on a North American tour, while the band will appear at the Heaven and Hell Metal Festival in Toluca, Mexico, on December 2nd Earlier this week, the band was announced as part of the lineup for the inaugural Sick New World festival in Las Vegas on May 13th.